At local bakeries, these French morsels are having a moment

On a cool Saturday morning, the Midtown farmers’ market bustles with the ebb and flow of regular shoppers who browse through offerings from more than 50 local vendors selling everything from fresh-picked produce to peppery beef jerky, handmade pasta, and warm Belgian waffles.

It’s here that Tiffany Domingo, owner of the Elk Grove-based bakery Love and Macarons, began to sell her delicate, French-inspired sweet treats to this dedicated crowd more than two years ago. By the end of the afternoon, she’ll sell out.

The mother of two and self-taught baker recalls the first time she tried the bite-sized sandwich cookie in 2011; the salted-caramel macaron inspired Domingo to get in her kitchen and try her hand at the technically precise recipe.

“After lots of trial and error — and several failed batches — I finally got it down,” Domingo says. “You have to make sure that you mix the batter correctly, fold it correctly, and not just that, but the ingredients have to be measured perfectly.”

A naturally gluten-free sandwich cookie made from almond flour, egg whites, and sugar, the macaron’s ingredients are deceptively simple. Yet, the recipe is anything but, as humidity and even the number of stirs can lead to a too-watery or too-stiff batter.

But conquer the recipe, and the reward is sweet.

Often confused with the macaroon, which is similar in spelling, the macaron is different in texture and flavor. The macaroon is a moist, dense cookie mound made with dried coconut and frequently dipped in chocolate, whereas the perfect macaron is light and airy and fits in the palm of your hand. The cookie shell is smooth and crisp, and the buttercream filling adds just a touch of sweetness; it’s all enjoyed in one or two bites.

Tiffany Domingo behind her Love and Macarons cookie stand at the Midtown Farmers’ Market on select Saturdays. Photo by Rachel Valley

Domingo’s love for macarons inspired her company’s name, and over the years she’s developed 13 flavors inspired by the seasons as well as books and even cute cartoon characters. Her butterbeer macaron, for example, was inspired by the Harry Potter book series. It’s filled with a butterscotch-and-sea-salt buttercream, and the cookie is lightly dusted with edible glitter.

Her glass cookie case, on display at the Midtown market, also is filled with flavors such as pumpkin spice latte, strawberry shortcake, and a ridiculously cute, unicorn-shaped macaron that’s filled with watermelon buttercream and a chewy, watermelon-flavored Sour Patch Kids candy. Domingo also makes an adorable Pusheen the Cat-shaped macaron with passion fruit buttercream, as well as macarons shaped like emojis, cacti, and even an assortment of lovable pandas and brown bears, which come in flavor varieties that include cookie butter, s’mores, and black cherry-vanilla.

“Everyone looks forward to seeing the characters in the morning, especially the children,” Domingo says. “When they stop by the table, it makes me feel so warm inside to know that people like what I create. Macarons are definitely the new it dessert.”

Across town in the Curtis Park neighborhood, Freeport Bakery owner Marlene Goetzeler and her dedicated staff of bakers and cake decorators make sure to keep macarons stocked in the dessert case. They come in such popular flavors as mocha, lemon poppy seed, and lavender, as well as seasonal varieties that include hazelnut, salted caramel, and peppermint during fall and winter. 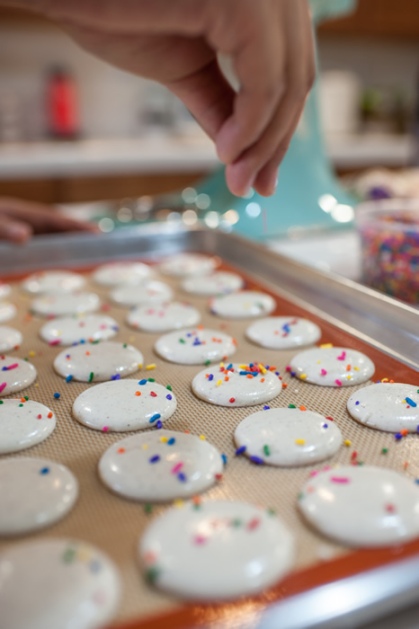 The bakery celebrated its 30th anniversary in August, and it remains a staple stop for sweets with its assortment of classic confections such as fruit basket cakes, cupcakes, and cookies, in addition to freshly baked breads.

For the bakery’s head cake decorator, Carol Clevenger, who’s been employed at Freeport since the bake shop first opened its doors, it’s important to keep up on the trends in the ever-evolving world of sweets, whether that has meant getting creative during the cupcake and cake-pop crazes or developing unique macaron flavors during the fall and winter seasons — because, at the moment, the bite-sized macaron is proving to be in demand, she says.

“It’s actually surprising how popular they’ve been, but macarons are so different and elegant,” Clevenger says. “People really like the little sweet stuff.”