On a hot Saturday afternoon, ice-cold drinks and root beer floats are served inside the Burly Beverages Gift Shoppe & Tasting Room, an old-fashioned soda fountain located in the Del Paso Heights neighborhood. Rows of specialty sodas, seltzers, and cocktail essentials line the shelves, and co-owner and founder Gabriel Aiello welcomes guests from behind a sleek corner bar lined with black and chrome bar stools. The doorbell rings, and Aiello opens the door for two women so they can taste the variety of small-batch soda flavors Aiello’s seasonal menu features. For Aiello, this brick-and-motor location was once a simple dream. Still, the challenges that keep many small-batch culinary businesses from realizing their dreams are very much a reality.

With more than 11,000 small family farms in the Sacramento Valley, local culinary artisans are able to draw much inspiration from the abundance that surrounds them year round. That vast foundation allows them to create new ways to savor the region’s lush bounty of fruits and vegetables.

Whether they operate a food booth, run a pop-up supper club, or are a small-batch producer, independent culinary business owners share a passion for sourcing homegrown ingredients and highlighting the authenticity derived from their handmade goods. Still, the expense of launching a culinary dream — especially in its beginning stages — proves difficult for many small producers. So they turn to commercial kitchens and rent space as a more cost-effective approach to sharing their handcrafted goods with the masses. Yet with the growing number of culinary artisans in a booming agricultural economy, kitchen space is extremely limited, which often hampers these budding businesses with a farm-to-fork ethos. Nevertheless, the drive for homemade taste and DIY spirit persists. 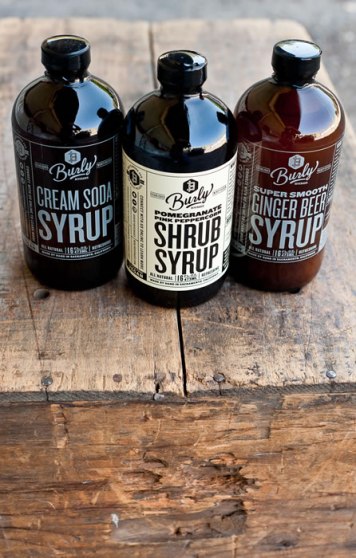 Burly Beverages, with its all-natural take on old-fashioned soda pop, shrubs, and switchels (a fermented drink with purported health benefits), got started two years ago when a search for ginger beer without corn syrup proved challenging to find on grocery store shelves. So founder and co-owner Gabriel Aiello decided to make his own. He rented production space at Preservation & Co., his former employer and a business known for its spicy Bloody Mary mix. There he learned how to perfect his recipes and studied the ins and outs of running a successful business from Preservation’s founder Jason Poole.

“He helped us out so much, and I could not have started this business if I wasn’t working there,” Aiello says. “Learning from other food makers, that information is more valuable than anything I could find online. Having that community of makers is invaluable, and I want to provide that for other folks.”

In May, Aiello opened the Burly Beverages Gift Shoppe & Tasting Room, where he serves his flagship flavors, including Super Smooth Ginger Beer and the Real Deal Root Beer. The historic art deco building works well as an old-fashioned soda fountain, where ice cream floats paired with Aiello’s classic take on orange soda — made from oranges and carrots, the latter being the source of its bright color — also grace the menu.

With the freedom to brew his small-batch beverages in a kitchen all his own (named The Shrubbery), Aiello says he’s ready to welcome other culinary artisans into the fold.

Sylvanna Mislang, chef and owner of the vegan pop-up supper club The Roaming Spoon, noticed when she started her company in November 2013 that it was quite a struggle to find commercial kitchen space. She notes that she and other small business owners were competing for blocks of time with the growing number of the region’s food truck vendors.

By chance, Mislang met Burly Beverages’ Aiello at a Meatless Monday pop-up dinner hosted at Old Ironsides in Downtown Sacramento. Aiello uses the venue to introduce his products to new customers; eventually he welcomed Mislang to make use of The Shubbery’s kitchen space.

“It’s really hard to find a commercial kitchen that is open to your schedule,” Mislang says. “Locally owned, small commercial kitchens like I found in Burly really help me out. Knowing people in the community are willing to help you get your food out to the masses and want you to succeed is wonderful.” 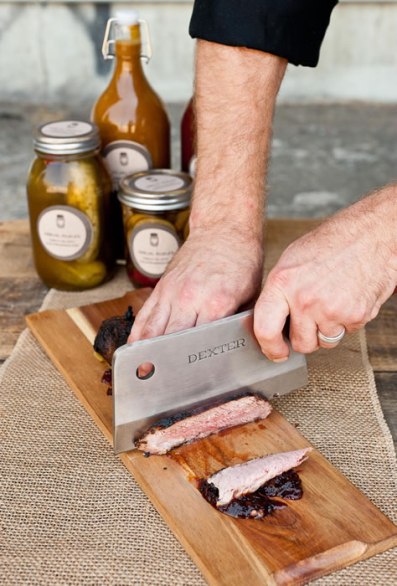 On Saturday mornings at the Oak Park Farmers’ Market, husband and wife team Aaron and Allison Anderson dish out what they describe as California soul food under the name Purple Pig Eats.

“It’s food that’s comforting and feeds your soul, but we give it that California twist,” Aaron says. “We source fresh. We source local, especially when we’re working at the farmers’ market. If it’s around, we’re grabbing it.”

The aroma of smoked meats wafts, luring customers over to a large purple menu board outside the booth that lists what’s cooking. Today, it’s fresh corn and pine nut flapjacks topped with market-sourced berries drizzled with a vanilla-corncob nage (i.e. a flavored liquid used for poaching foods) syrup. There’s also the breakfast mac ’n’ cheese and the farmers’ market hash, both topped with fried eggs.

“When I hand [customers] the food and they’re like, ‘Oh my god! It’s so pretty,’ that’s great,” Allison says. “But when they take the time to come back to the booth and tell me how it blew their mind when they have that food coma glow, that’s what makes this worthwhile.”

A common love for cooking (and each other) fuels Purple Pig Eats’ cuisine, and the Andersons have their sights on bottling and selling their homemade pickles and sauces one day, including their tomatillo ketchup and Sweet Cali mustard sauce.

The two prep for events using the commercial kitchen at the Courtyard D’Oro in Old Sacramento, where Aaron works as the director of culinary operations. But the Andersons recall stressful times before finding this kitchen space, when they would bounce from one kitchen to another in order to meet the demands of running an active business.

What’s more, Sacramento County health officials cracked down on pop-up booth restaurants last fall for the first time and informed owners that they can no longer operate inside the breweries, galleries, and cafés that regularly hosted them.

As of now, there is no specific permit designed for pop-up booths, even though these culinary vendors are required to follow the same sanitary, food and health, and safety codes as food trucks and even food carts. Yet the county allows pop-up booth restaurants to operate at community events and festivals with no qualms. So the question remains, why is one circumstance allowed and not the other? The added stress of new county restrictions is yet another layer of difficulty for those set on following their culinary dreams.

“I think the biggest issue right now with booth food and how it suffers is that there isn’t enough [kitchen] space, and the county is extra hard on us,” Aaron says. “I’ve watched our food evolve before my eyes being in the space we’re in. It just tells me that whatever we’re doing, it’s going to work.” 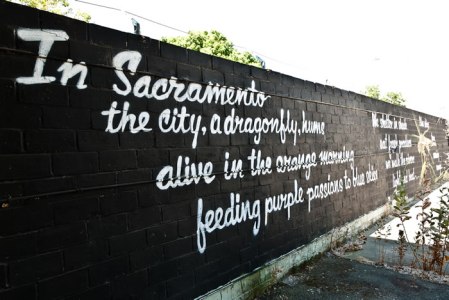 A mural on the wall of The Food Factory’s future location. Photo by Debbie Cunningham

Enter co-founder of Hot Italian pizzerias Andrea Lepore, who opened her chic Midtown location in 2009 and now has sites in Davis and Emeryville. Her flagship business earned a Leadership in Energy and Environmental Design silver certificate, an award that says a lot about Lepore’s environmentally conscious backbone.

Two years ago, Lepore earned her master’s degree from Boston Architectural College, focused on sustainable design. Her master’s thesis explored food incubators, a business model that provides large-scale commercial kitchen space, cold and dry storage, and top-of-the-line kitchen equipment for culinary producers. According to Lepore, with 200 food incubators operating nationwide, she noticed that Sacramento, with its booming agricultural and creative communities, was missing a grand opportunity.

So, she thought, why not open one in America’s farm-to-fork capital?

“I think we have a great opportunity, because of where we’re located, to create a new model for food incubators,” Lepore says. “We’re taking the best practices through the research of my thesis and my travels visiting incubators from Boston, Los Angeles, New York, and the Bay Area.”

Lepore shared her vision with Dr. Skip Rosenbloom, a former health plan medical director and businessman who also owns a 35,000-square-foot property located in the Alkali Flat neighborhood in Downtown Sacramento. As a proponent of the idea that food is a person’s best medicine, he was all in.

Together, they plan to launch Sacramento’s first food incubator, The Food Factory, a project set for completion within the next two years. She anticipates it will cost about $5 million to develop the downtown site, but she’s working on raising money and also is looking for sponsorship. One possibility is to form a nonprofit so The Food Factory could be funded through grants and foundation money.

For Lepore, The Food Factory is not only a great opportunity for artisans to increase production volume and improve their culinary skills, but also a place where they can sell their goods on site in the incubator’s retail space. Lepore says about 25 businesses could occupy the space, which solves the need for more commercial kitchen access. There also are plans for a courtyard where customers can sit and enjoy their locally purchased goods. It’s a place where small food producers and caterers alike can learn from each other and see their culinary dreams come to light.

“I think there are so many talented people who have great ideas and amazing skills. They may just lack the capital or an affordable place to work, or they don’t have the marketing background,” Lepore says. “What they all have in common is the desire to create something from scratch, and that’s inspiring. I want to be able to help them get their businesses off the ground and stay in business.”

CULINARY DREAMS was the cover story of the Fall 2017 Issue of Edible Sacramento.