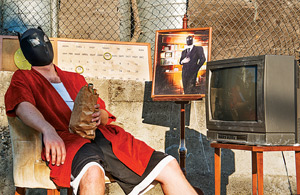 My instructions were: “Meet at the Pre-Flite Lounge at 8 p.m. Tell the bartender, ‘Eight lives down, one to go.’ He’ll know what to do.”

I entered the back-alley bar prepared for a rare, face-to-face interview with an elusive Sacramento musician known as El Gato, who refuses to share his real name. I recite the strange message to the bartender who lightly taps the bar in approval before he texts someone to signal that I’ve arrived.

After a few moments of silence, the bartender leads me to a back door labeled “employees only” and into a dimly lit parking garage. He departs, but I’m not alone.

Instead I’m joined by a headless mannequin that hangs by a rope and the aroma of exhaust fumes. Sitting behind a fold-out table is El Gato, his face concealed by a tight, black mask reminiscent of the alter egos embraced by luchadores. His has pointed, silver eyes and hornlike cat ears. He’s joined by Mechanical Bull Records music producer Sean Arrant, who acts as this ominous musician’s mediator. Between questions, El Gato sits silently and either nods slowly or coldly shakes his head. Serious about anonymity, he never removes his mask.

This is El Gato’s first public interview ever before this week’s performance at the Press Club, when he unleashes his debut, five-song video EP The Executive Party Box Vol. 1: Given ’Em the Boot with El Gato, a project five years in the making.

A large-scale interactive video sculpture controlled by El Gato will entertain audience members with his original compositions and eclectic stream of music videos created to “invoke feelings of fear and unease.” The underlying mystique of El Gato is influenced, he says, by artists like Salvador Dalí, villains like Marvel Comics’ Galactus and the darker eccentricities of Gene Wilder’s portrayal of Willy Wonka.

Despite El Gato’s enigmatic and villainous reputation, he uses his talents as a multi-instrumentalist to create sincere music that delves into just about every genre, but with a heavy emphasis on dusty rock ’n’ roll. Each song is accompanied by its own unique music video that El Gato also shoots and directs.

The opening track on Party Box, “Sam I Am,” is a bluesy, soul-driven and dysphoric anthem, with its fixed tambourine beat and somber background vocals that keep a foot-thumping pace. But, it’s the song “Shit Bananas V.2” where El Gato taps into his inner Beck.

The black-and-white music video opens with the masked musician waking up from a long cat nap before strutting the streets of downtown Sacramento. The catchy song combines acoustic and electric guitars with laid-back drum beats, and its lyrics are clever and phonetically playful.

Its chorus stays with the listener for hours—sometimes days—but its upbeat, singalong appeal is ironically the antithesis to the mastermind behind the music.

Back in the depths of the parking garage, El Gato quietly whispers his responses to my inquiries in Arrant’s ear and, at times, scribbles down his replies inside his fancy stationery adorned with an image of his signature mask.

As the video EP release draws near, El Gato expressed through a written response that he aims “not only to terrorize the ears of his victims, but also their eyes” and warns, “This EP is just the initial volley in the all-out war against humanity.”

This article, written by Steph Rodriguez, was published in the Sacramento News & Review on July 13, 2017.