There’s nowhere quite like Sacramento, because let’s face it—Sacramento is home. Home to late-night music venues that support the likes of local punk, garage-rock bands and more.

It’s where sports teams like the Kings, the River Cats and the Republic FC hang their uniforms. And this town really supports its teams whether it’s at a bar at 7 a.m. for an early soccer match or from the nosebleed section with no cup holders—fans are devoted.

And, thanks to its Mediterranean-style climate, Sacramentans can always eat seasonally with year-round leafy greens, summer’s sweet berries and fall’s abundance of apples and gourds.

Indeed, our love for the region is experienced in many ways, and for some, it’s a feeling to be expressed in a permanent fashion—by dedicating an entire tattoo as an homage to the 916.

From the more soft, watercolor-inspired ink that plays with negative space to the vivid lines and shades of traditional-style tattoo work, SN&R spoke to four men and women who share a common love for the region through these playful depictions that truly are for keeps.

Map of her heart 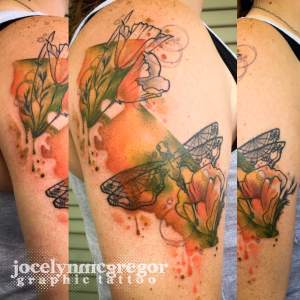 As an aquatic ecotoxicologist, Charlene Derheim spends a lot of time testing live organisms and observing marine and stormwaters in a Fairfield laboratory. But, beneath her lab coat, Derheim reps her home away from petri dishes and microscopes in the form of a Sacramento-centric tattoo that permanently decorates her entire upper right arm.

“I’ve been all over the world and I love California and Sacramento,” she says. “I love the weather. I love the people. I love that there’s such diversity here. I just love all the commotion that comes with living here.”

Local artist Jocelyn McGregor at Old Republic Tattoo Co. helped Derheim design her watercolor-inspired homage to both California and Sacramento, a city she’s called home for more than a decade. Inked with earthy greens, burnt orange hues and soft yellow tones, the shape of California is complemented with a bare heart where Sacramento is located.

“Most of my adult life has been spent in Sacramento and that’s kind of really where I grew into the person that I am now,” Derheim says. “One of my life’s milestones at this point in my life is here and that’s something that I will always remember and cherish wherever I go. I might not always live in Sacramento, but a part of me will always be here.”

Live in the moment, always

When she’s not singing with her nine-piece reggae group the Scratch Outs, Shannan Robertson is soaking up the quiet scenery along the Sacramento River in her kayak. She’s a homegrown songbird who says music keeps her grounded and also introduced her to a world of artistic company who she deems as lifelong family.

Fifteen years ago, Robertson was willing to lend her arm in the name of art to friend and local tattoo artist, Ezra McCabe, now owner of Black Gold Tattoo, to help build his portfolio.

Then, things turned serious. On September 11, 2001, when news broke that the Twin Towers had been attacked, McCabe knocked on her apartment door with the idea to combine two rivers within a heart, wrapped in a banner that read “Sacto.”

“He was pounding on my door,” she recalls. “I was sound asleep and was like, ’What’s going on?” And he [said], ’There’s crazy shit going on. They’re attacking New York City, so if we’re going to die, we’re going to die giving you your Sacto tattoo.’”

Over the years, Robertson’s tattoo has been joined by others, but it still shines as the centerpiece amid the pink and blue roses and the sturdy anchor that also grace her arm.

She still looks at it and thinks about that day long ago.

“It reminds me to live in the moment and to appreciate what I have now,” Robertson says. “The cruelest joke life plays on us is tricking us into thinking we have more time.”

’Tired of this town again’ 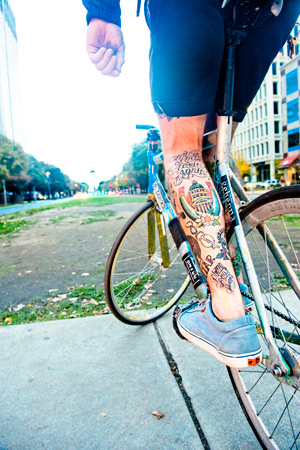 Born and raised in Sacramento, Jesse Alford spends a lot of time on his bicycle zipping through downtown’s gridlocked traffic as a bike messenger.

Alford says he sees his city from a different perspective on two wheels and although he admits he wishes he’d spent more time in other cities, he stays for his friends, family and also because his job allows him to keep doing what he loves: riding his bicycle.

Alford wears his love for Sacramento not on his sleeve, but on his calf. Ten years ago, he decided to let his friend and local artist Big Chuck (Relentless Tattoo) blast his leg with a colorful rendition of California’s state Capitol accompanied by a traditional-style horseshoe and a Tom Petty lyric, “tired of this town again,” inked by Jenn Ponci.

“I felt myself coming down with the 916-sickness and I thought it would be a cure,” he jokes before adding, “The Tom Petty quote right above is a testimonial to people that get stuck here and never leave.” 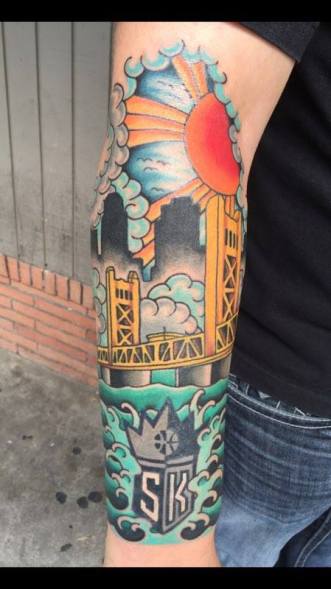 For Angelo Merrifield, there’s nothing more iconic in Sacramento than the Tower Bridge and his favorite basketball team, the Kings. So, he thought, why not combine the two for an epic River City-inspired tattoo?

“I’m a huge Kings fan, like die-hard, and I try to go to as many games as possible. It’s a big representation of the city, so that’s a big reason why I put it in there.”

The tattoo, designed by Jesse Mitchell at Royal Peacock Tattoo Parlor, features a Japanese rising sun bursting through puffy blue clouds with its vivid red and orange tinge as it shines down on the Tower Bridge.

The waters below the local monument range from sea foam green to lighter shades of blue with waves crashing against the crest of the Kings’ purple and silver logo, an homage to everything Sacramento.

“I wanted the Tower Bridge because it’s so recognizable and a lot of people would know that,” Merrifield says. “I love my city and it’s where I’m from.”

This story was originally published in the Sacramento News & Review on November 17, 2016. READ: SACRAMENTO, FOREVER.